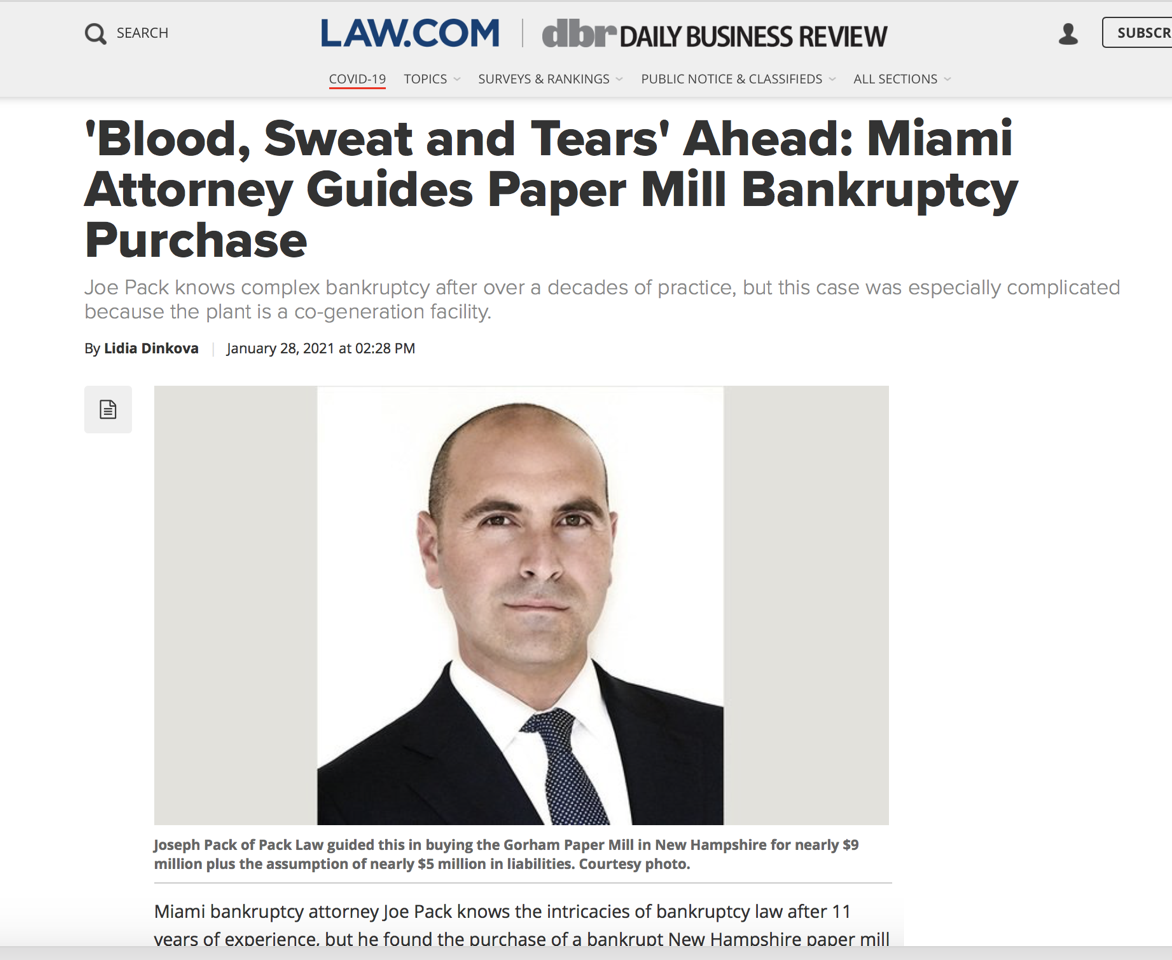 Joe Pack knows complex bankruptcy after over a decade of practice, but this case was especially complicated because the plant is a co-generation facility.

Joseph Pack of Pack Law guided [Behrens Investment Group]  in buying the Gorham Paper Mill in New Hampshire for nearly $9 million plus the assumption of nearly $5 million in liabilities.

Miami bankruptcy attorney Joe Pack knows the intricacies of bankruptcy law after 11 years of experience, but he found the purchase of a bankrupt New Hampshire paper mill was complex in its own right.

Pack, who started Pack Law after a decade in Big Law, represented investment firm Behrens Investment Group in its successful stalking horse acquisition of Gorham Paper & Tissue LLC in the Town of Gorham. Behrens Investment, a New York-based public and private sector investor, acquired substantially all mill assets and its subsidiary, White Mountain Tissue, in a deal valued at roughly $13.75 million. It breaks down to $8.75 million in cash, as well as the assu

Gorham Paper & Tissue — previously owned by trader and investor Lynn Tilton, her Patriarch Partners LLC and Zohar funds focusing on distressed debt — filed last November for Chapter 11 bankruptcy protection in Delaware, citing challenges in meeting cash flow and debt obligations. Prior to this, Tilton had filed for bankruptcy for her Zohar investment funds and is under a global settlement agreement in those cases.

Gorham Paper had reported debts between $50 million and $100 million in debt, including money owed to the town and a regional refuse disposal district.Federal bankruptcy Judge Karen Owens in Delaware last December approved the sale to Behrens Investment.

As a stalking horse bidder, it set the floor price. Despite extensive marketing and substantial interest in the mill, Behrens Investment was selected as the best and highest bidder.Behrens Investment also was a secured lender, extending a loan to the mill so it could continue operating during the bankruptcy proceeding.

For Pack, his first paper mill bankruptcy case also turned out to be a case about electricity.“The fact that this as a co-generation facility turned the acquisition into more of an energy deal than I had anticipated,” he said. “It was just as much an energy-focused bankruptcy as it was the acquisition of a hard asset.”

The mill is a co-generation facility that partners with renewable power company Brookfield, meaning a lot of the assets in the bankruptcy proceeding were co-owned by the two.The co-generation facility essentially is in a dependent relationship with Brookfield, which owns and operates renewable power assets.The mill is hydro-powered by a dam from nearby Androscoggin River. And as energy is a byproduct of its paper production, it partners with Brookfield with the two co-generating electricity.

Pack’s work included working through the contracts, spelling out the co-dependent relationship so new owner Behrens Investment and Brookfield continue their partnership. “There’s meters, there’s tubing, there’s infrastructure. All of that stuff is co-owned and it’s governed by contracts that are very difficult and probably mostly economically unfeasible to terminate,” he said. “You basically have to cut a deal with your partners who co-own these fixtures and real estate. The parties need each other to run and operate. That’s what really added a layer of complexity to what’s already a complex case when you are talking about a manufacturing plant.”

Behrens Investment will modernize the mill it’s rebranded as White Mountain Paper Co., a welcomed investment as Pack said the plant is in an economically-depressed area. Behrens will significantly upgrade the power, water and civil infrastructure to make it a state-of-the-art facility and “a leader among North American tissue and towel producers,” said Evan Behrens, managing partner.

The plant is on a 60-acre site and includes pipelines, warehousing space, multiple boilers and a waste treatment center, according to a bankruptcy court filing. It can generate more than 150,000 tons of product annually.The mill first opened in 1852 as the Berlin Sawmill in Berlin, New Hampshire, and six years later added pulp and paper operations. It’s one of the oldest operating paper mills in North America.

It can produce roughly 30,000 tons of product annually for the North American tissue market.Most of the 106 employees will remain after Behrens worked closely with the union and didn’t disrupt those agreements, Pack added. Upgrading the asset won’t be easy.

“It’s an asset that is going to require a lot of blood, sweat and tears to get to that place. Behrens Investment Group is going to put that effort in, in addition to the money. It’s not the type of asset where you just write a check and the problems go away,” Pack added. “It’s the type of asset where you really have to be there, present to turn it into something that’s a real gem.”