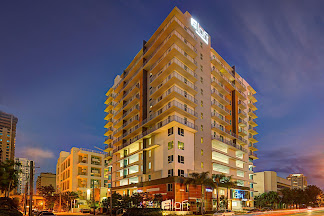 Mary Brickell Village Hotel, LLC, a Miami-based owner of the Aloft Miami Brickell, a Marriott International hotel brand, filed for chapter 11 protection on Wednesday in the Bankruptcy Court for the Southern District of Florida. The company reports approximately $34 million in assets (including $32 million as the fair market value of the hotel property) and $18.4 million in liabilities. The debtor is represented by Pack Law in Miami as general bankruptcy counsel and Zarco Einhorn Salkowki & Brito as special litigation counsel. The case number is 21-17103. The case has been assigned to Judge Robert A. Mark.

According to the first day declaration of Pedro Villar, who “built the Hotel” and is the manager of the debtor, the debtor’s prepetition capital structure includes $17.8 million in secured debt owed to DF VII REIT Holdings, LLC (referred to as Torchlight 2) with respect to a mortgage, $289,015 in priority unsecured debt and $268,803 in general unsecured debt.

The debtor said that it reached out to Wells Fargo, the then-master servicer of the mortgage, at the onset of the pandemic, to “forge a go-forward path in case loan service became difficult during COVID.” Villar continues, however, that “months passed until MBVH would learn that Torchlight Special Services, LLC, the then-special servicer of the Loan (‘Torchlight 1’), was ultimately responsible and Wells Fargo would, in fact, not be assisting with any modification whatsoever in respect of the Loan.” Thereafter, in February 2021, DF VII REIT Holdings, LLC, or Torchlight 2, acquired the loan from its affiliate, after which it “involuntary accelerated the Loan, and commenced an aggressive foreclosure action against the Debtor, through which it sought to seize the Hotel’s income and collect a multi-million dollar prepayment fee.” The debtor says that Torchlight 2 “is, and has always been, unwilling to engage in negotiations to achieve a workout.”

The debtor seeks to “preserve the going-concern value of their business and dozens of full-time jobs, implement a reorganization, through which the Debtor intends to exercise its rights to cure any alleged defaults related to the mortgage, subject to its legal and equitable arguments for reductions in respect thereof, and continue operating in the ordinary course.” Villar says that despite facing its “most serious challenge since it it opened its doors during the Summer of 2013,” the Covid-19 pandemic, the hotel “maintained its value in excess of $30 million and is entirely unencumbered, but for its $17 million mortgage.”

Villar says that “optionality is its best path forward and is the only way to achieve 100-cent recoveries for all stakeholders in MBVH,” adding that “this can only occur in a chapter 11 proceeding, through which the Debtor plans to either (a) cure alleged defaults under the Loan and reinstate the Loan on fair market terms, or (b) pay off Torchlight 2 in full, but only after right-sizing the alleged outstanding liability under the Loan (after, among other things, asserting the Debtor’s legal and equitable rights against all parties in interest, including Torchlight 2).”  The debtor’s corporate organizational structure follows:

Reorg First Day will provide a full summary once the first day briefing is complete.